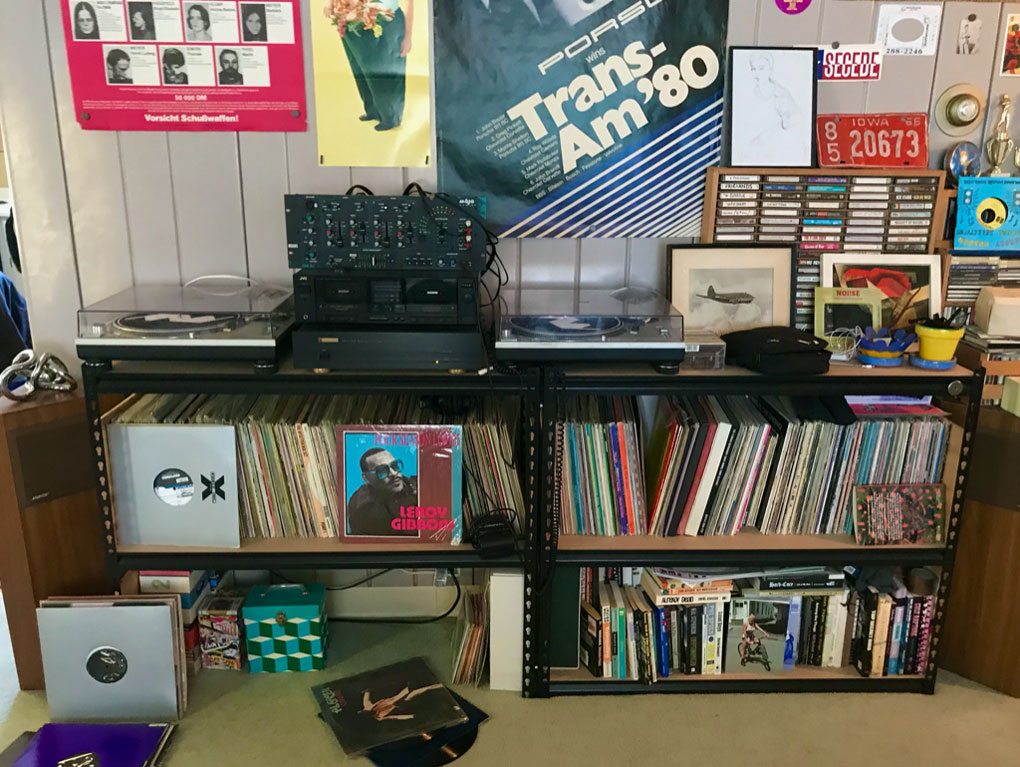 Music played a huge role in Alex Brown’s work as a painter, on many different levels. In 2015, Tony Rettman interviewed Alex for VICE about his epic collection of rare Jamaican records, and a lot of other territory:

Noisey: Do you follow any rules when digging through crates to find this stuff?

Alex Brown: There are no rules regarding digging for music, except try to look through everything or else you might end up missing the real score. I prefer the original Jamaican pressings, whether it be 45, LP, or 10-inch. Represses are okay, but the originals generally sound better, even when they’re scratchy—maybe the wear adds some character. Producers are the first thing to look for, along with what label it’s on; usually the producer and label are synonymous. Also, look to see who the singer or deejay is. Jammy’s, Upsetter and Studio One are pretty much can’t miss.

Were you collecting this kind of stuff during the Schism or Side By Side days?

I have always been into records. When I moved to NYC, I quickly became friends with Ray Cappo and Porcell who shared my love for records. They both had amazing collections of punk and hardcore records. I got a job working at Venus Records in 1987 when they were on 8th Street near 6th Ave. It was located on the second floor and you had to ring a buzzer to get in. I worked with Ron and Bobby who were two rock guys from Jersey. They were the coolest guys and turned me onto so much good music. I worked on Saturdays, and that was the day when people would come in to sell their records. By the time I got fired from there, I had a pretty great collection. Sadly, I sold it all many years ago. Bad decision! I didn’t really start collecting Jamaican stuff until the 90’s. I was always hesitant to shop in any of the reggae stores. I don’t know if you were around then, but there were a lot of reggae shops around downtown which were just fronts for weed dealers. It was sort of like those bodegas that had barely any merchandise and bulletproof glass kiosks that sold coke in the East Village way back when.

Yeah, I remember when I ‘broke edge’ in the 90’s and I went into one of those bodegas to buy weed. I guess I looked super suspect, because the dude wouldn’t sell the weed to me, but he would to my friend. That kind of brings up this drunken theory I have on the parallels between Jamaican musicians and NYHC. So much folklore! Both worlds are full of weirdoes and cutthroats.

I think there are a bunch of parallels to be drawn between NYHC and the Jamaican scene. It’s even more similar to the early hip hop scene; cash businesses are great for laundering money. But yeah, both hardcore/punk and reggae are steeped in reality and the plight of the sufferer. Also there’s the independent angle; people circumventing the mainstream and putting out their music on their own labels and doing all the artwork, marketing and promotion on their own dime. DIY all the way.